The plaintiffs in Allegaert are neighbors of the Harbor View Hotel in Edgartown. The hotel is a longstanding nonconforming use in what is now a residential neighborhood. In the early 1990s the hotel received special permits to serve food and beverages in certain outdoor areas. In 2019 the hotel applied for a new special permit to replace an existing pool bar with a new bar near the pool but outside the pool fence. 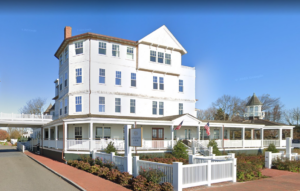 The Edgartown zoning board posted and published notice of the hotel’s application and claims to have sent notice by mail to abutters and other parties-in-interest as required by M.G.L. c. 40A, § 11. After a public hearing the board voted to grant the special permit and issued its decision on May 3, 2019. No one appealed within the ordinary 20-day appeal period under M.G.L. c. 40A, § 17 (Section 17), so on June 13, 2019 the hotel started work the new bar.

The plaintiffs filed their first appeal on June 21, 2019, claiming they hadn’t received notice of the hearing and were unaware that the special permit had issued until construction began. They invoked the clause of Section 17 that allows appeals alleging procedural defects – particularly defects in notice – to be brought within 90 days. The plaintiffs alleged both defective notice and that the special permit was improperly granted on the merits.

The hotel and the zoning board moved to dismiss the plaintiffs’ appeal as untimely. Treating the question of whether proper notice had been given as affecting the court’s subject matter jurisdiction, the trial judge – instead of accepting the plaintiffs’ allegations as true, as required on a motion to dismiss under Rule 12(b)(6) – credited a sworn declaration of the board’s administrator that notices had been duly mailed to the plaintiffs and discredited the plaintiffs’ sworn declarations that they hadn’t received those notices. Concluding that the appeal was untimely and the court therefore lacked subject matter jurisdiction, the trial judge dismissed the case.

In the meantime, the same plaintiffs had filed with the town Building Inspector a separate request for zoning enforcement, claiming that the new bar is outside the area in which the hotel’s original special permits authorized service of food and beverages, so service at and around the new bar is unlawful. The Building Inspector disagreed, the zoning board denied the plaintiffs’ administrative appeal of that decision, and the plaintiffs filed a separate court appeal. A different trial judge dismissed that appeal on the ground that the plaintiffs’ new enforcement claim was in effect a second, untimely appeal of the 2019 special permit. The plaintiffs’ appeals from both dismissals were consolidated and heard by the Appeals Court, which reversed both judgments in part.

On the notice issue, the Appeals Court rejected the defendants’ position that Section 17 creates two appeal periods for challenging a zoning decision on the merits: 20 days in the ordinary course and 90 days if the appellant can show defective notice. The court clarified that Section 17 creates two appeal periods for two different types of challenges. For challenges on the merits, the statute provides an appeal period of 2o days, which is the appellant’s exclusive remedy. For challenges to the validity of a decision based on procedural defects, the statute provides an appeal period of 90 days. Thus, the Appeals Court concluded, when considering the defendants’ motion to dismiss, the trial judge should have accepted as true the plaintiffs’ allegations that they didn’t receive notice and allowed the appeal to proceed. Without deciding the issue, the court noted, “If true, the sheer number of persons who did not receive notice belies any suggestion that perhaps a [single] notice was mislaid in the mail.” The court added that not all defects in notice require a new hearing: where it appears appellants had actual notice of the public hearing they must show they were prejudiced by the defect.