The merger doctrine is alive and well in Massachusetts zoning law.  In its recent decision in Kneer v. Zoning Board of Appeals of Norfolk, the Appeals Court examined whether the doctrine applies to property owned by a realty trust where a trustee owns abutting property individually.  The Appeals Court disagreed with the way the Land Court applied the doctrine, but remanded the case for additional factual findings to sort out whether the merger doctrine should apply.

Under the merger doctrine, a nonconforming lot that is held in common ownership with an adjoining lot may be deemed “merged” with the adjoining lot to the extent necessary to reduce or eliminate the nonconformity. Case law recognizes that adjoining lots can merge even if they’re nominally owned by different entities. For example, in Planning Board of Norwell v. Serena, a married couple, attempting to avoid the effects of an anticipated change to the zoning bylaw, owned one lot as co-trustees of a realty trust of which they were the sole beneficiaries, and an adjoining lot as tenants by the entirety. The lots were deemed to be in the couple’s common control, and therefore they merged. Similarly, in DiStefano v. Town of Stoughton, the owner of a 40-lot tract of land attempted to avoid the effect of a zoning change by having his company transfer ownership of some of the lots to himself individually, some to his wife, and some to himself as trustee of a realty trust, in an alternating pattern (a technique known as “checkerboarding”). The Appeals Court rejected this effort, finding common control of all the subject lots. 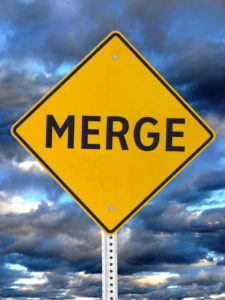 At issue in Kneer was an undeveloped lot in the Town of Norfolk (the parcel) that was created in 1945, before the town’s adoption of a zoning bylaw. The minimum lot size requirement adopted in 1953 rendered the parcel nonconforming as to size.

In 2001, Mildred Kneer and her husband created the Kneer Family Revocable Trust as an estate planning tool. In 2010, after her husband died, Kneer amended the trust and named herself and her daughter, Deirdre Mead, as co-trustees.

In September 2012 the trust, through its co-trustees Kneer and Mead, bought the parcel. It abutted land owned by Mead individually, where Mead lived.

The trust applied for local permits to build a small home on the parcel. The permit applications were in the trust’s name and Kneer was the sole signatory on the documents. The town’s building inspector denied the application for a building permit on the grounds (among others) that when Mead and her mother, as co-trustees of the trust, bought the parcel in 2012, it merged with the adjacent lot that Mead owned in her individual capacity. The town’s zoning board of appeals upheld that decision and the trust appealed to the Land Court. There, a judge affirmed the board’s decision, agreeing that the parcel had merged with Mead’s individual lot when the trust acquired the parcel in 2012.

The Land Court judge considered whether, through her role as co-trustee, Mead assumed “legal control” over the parcel when the trust acquired it. He focused on her broad powers as co‑trustee, including the authority to take actions with respect to trust assets without Kneer’s prior approval. The judge concluded that Mead’s trustee authority was sufficient – by itself – to place the parcel under the same legal control as the adjacent property that Mead owned individually.

The Appeals Court disagreed, noting that the Land Court judge’s reasoning “pass[ed] over the fact that Mead’s powers over the parcel necessarily were subject to her fiduciary obligations.” Mead’s first duty was protection of the trust estate. For example, as the court noted, because Mead’s treatment of the parcel as her own would have – by operation of merger – destroyed the ability to develop the parcel (and resulted in a loss of the purchase price), taking such actions would directly conflict with her fiduciary duties as co‑trustee.  The Appeals Court concluded that whether the board of appeals could properly treat the two parcels as being under Mead’s legal control could not be resolved as a matter of law. There were facts that cut both in favor and against merger. Because the Land Court judge made findings based on an incorrect view of the law but “still could be correct for a different reason,” the Appeals Court remanded the case for further proceedings.

Many real estate practitioners have clients who own adjoining lots and want to protect those lots from the effects of future zoning changes by preventing application of the merger doctrine. The Kneer decision signals that, given the fiduciary duties owed by trustees to trust beneficiaries, the trust form of ownership – if used correctly – may be a viable means of avoiding merger. We’ll monitor this case while it’s on remand and report on any further decisions from the Land Court or the Appeals Court.