When Your Neighbor’s Tree Blots Out the Sun, Can You Force Them to Take It Down? Not In Massachusetts

Imagine owning your dream house. You have your pool, your barbeque area, your big lawn for the kids to play on. You’ve worked your whole life for this, and now you have it. It’s perfect. Well, except for your neighbor’s overgrown 100-foot tall sugar oak. It’s so massive it blots out the sun. Your yard is bathed in perpetual shade. Your roof is covered in moss. You’re pretty sure you could grow mushrooms commercially. You complain to your neighbor. You mention cutting it down, or at least trimming it back. He laughs at you. That’s your breaking point. You’ve had enough. It’s time to sue him, right? Sure – just not in Massachusetts. 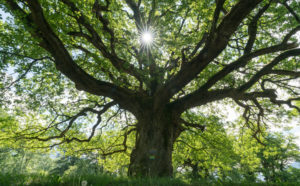 A case called Shiel v. Rowell (pdf) presents the age-old question of how society should resolve pesky disputes between neighbors involving trees. Should the courts impose reciprocal responsibilities on the neighbors, requiring them to consider the harm their healthy tree may cause to their neighbors and to compensate them for the actual harm caused? Or should a person be the king or queen of their domain, owing minimal responsibilities to those impacted by their choice of landscaping? In Massachusetts the answer is clear: property rights are paramount.

Mary Shiel, the plaintiff, lives next door to the Rowells. The Rowells have an exceedingly large oak tree whose branches extend over Shiel’s property. The tree shades Shiel’s property and, Shiel claimed, had caused a buildup of algae on her roof. Shiel, unhappy with the effects of the tree on her property, demanded that the Rowells cut down their tree. The Rowells refused, and Shiel sued. A state District Court judge dismissed the case, finding it was controlled by a 1983 case, Ponte v. DaSilva, and other longstanding Massachusetts precedent. The decision was upheld by the Appeals Court, and, undeterred, Shiel appealed to the Supreme Judicial Court (SJC).

On appeal, Shiel argued that the SJC should discard the Ponte ruling as outdated, and instead adopt the so-called “Hawaii Rule.” The Hawaii Rule allows an affected neighbor to recover tree-related damages from the tree owner and cut back branches and/or roots if there’s an imminent danger that they’ll cause serious harm to the neighbor’s property. The rule explicitly exempts from the definition of “harm” the dropping of leaves, fruit, or flowers, and the casting of shade. Shiel contended that the so-called “Massachusetts Rule” was outdated, a vestige of a time when properties were typically much larger and neighbors much father from each other. Because people now live much closer together, the potential for damage from neighboring trees has increased, and this justifies modifying the rule, she argued, to provide neighbors a right of action. In response, the Rowells argued that the Massachusetts rule functions just as well in the present day as it did when it was first adopted, and that Shiel presented no compelling reason to abandon time-honored precedent.

The SJC ultimately sided with the Rowells. The court noted that while Massachusetts has undoubtedly changed since the rule was originally adopted, those changes have not rendered the rule outdated and inapplicable to daily life. Both tree owners and neighbors are now able to monitor and deal with problem trees more easily than in the past. The closer proximity between property owners makes it simpler for neighbors to judge the possible negative effects of neighboring trees and deal with them proactively, either through negotiation with the neighbor or by trimming encroaching branches or roots if needed. In either case, the SJC found that the rule functions just as well in the current century as it did in the past.

The SJC’s decision does not leave neighbors without options. The court was careful to note that under the Massachusetts Rule, property owners still maintain control over their own property; if the branches or roots of a neighbor’s tree cross a property line, the property owner is entitled to cut them. And the Rule only applies to healthy trees; unhealthy trees can still be considered a nuisance, and tree owners remain liable for any damages caused by them. The court noted that such a rule creates clear lines for liability and prevents costly legal proceedings.

Thus Massachusetts remains a beacon of personal liberty; property owners remain the lords and ladies of their domains, provided they don’t have unhealthy trees. If the tree is unhealthy then all bets are off.